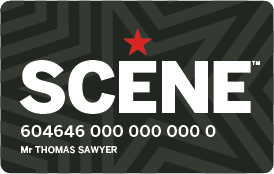 Once you have the email with your card, you can use it the same way as your plastic SCENE card — show it on your phone or print it out! Show your SCENE card to:

^ SCENE members who present their membership card or enter their membership number at the time of transaction will receive a 10% discount on the purchase of admissions, valid for performances on Tuesdays only. Maximum 6 tickets. This offer is valid for the purchase of admission tickets only and cannot be used in conjunction with any other discount, passes, coupons, vouchers, pre-purchased tickets, SCENE point redemptions or any other admission offer. Offer is subject to change or may be withdrawn at any time, without notice.

* SCENE points may be earned and redeemed on food and drink (excluding Tim Hortons® and alcoholic beverages) at Cineplex theatres including Concessions, Outtakes®, YoYo’s Yogurt Café®, Pizza Pizza®, Poptopia®, Starbucks®, Cineplex VIP™ Lounges and in-seat dining. 5 SCENE points will be issued for every $1 spent, rounded down to the nearest whole dollar, less all taxes and gratuities. SCENE members may redeem in increments of 500 SCENE points to receive $5 off Cineplex food and drink purchases. Only one SCENE membership card can be used per purchase. Cineplex, Outtakes®, Poptopia® and Cineplex VIP™, owned by Cineplex, used under license. YoYo’s Yogurt Café®, owned by YYC Franchise Corporation, used with permission. Pizza Pizza®, owned by Pizza Pizza Royalty Limited Partnership, used with permission. Starbucks®, owned by Starbucks Corporation, used with permission.